Book Review: We are the Post-Theological: A Slightly Humorous and Deeply Serious Explanation of the World’s Fastest Growing Religious Group 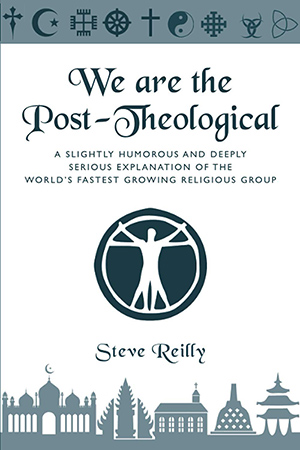 After Pew Research revealed those who mark their religious preference as “None” to be the fastest growing religious segment in America, Christians have been bewildered about how to relate to this “Rise of the Nones.” Steve Reilly labeled this group “Post-Theological.” The book reveals his personal explanation of how this unique and growing population thinks.

While it’s easy to take potshots at what Reilly explained, including his assumptions, inconsistencies, colorful language, and personal hot buttons, the reader has a much longer and more extensive explanation than most Nones would give to most people. Because it’s a book rather than a conversation, it’s provides an opportunity for those of us who are religious to listen. If we do, our understanding can increase, as will our empathy, humility, and hopefully our love as well.

The “We” in the title seems rather bombastic since the author excuses himself in the introduction for not providing supporting references for his opinions. One person’s perspective certainly should not be considered normative for all Nones. Reilly’s Catholic background seems to have left him in need of a therapist, but he takes it out on all Christians. He sees the god (he prefers not to capitalize religious terms except for “Post-Theological”) of Christianity as dogmatic, exclusive, unloving, isolationistic, vengeful, irrelevant, strong-arming, anti-________ (many things), and myopic.

Most Christians would take exception to such attacks. But if the reader listens, one must admit that some of what he wrote is true. Most Christian religions see themselves as the ones who have “the Truth” especially compared to non-Christians. We have an accumulated set of rules from the past 2,000 years that sometimes don’t make a lot of sense. The Christian (not SDA) belief in an eternally burning hell doesn’t match well with a loving God. The way Christians have treated women as well as most minorities of any description is something we must own. We have reason for humble repentance.

But the Post-Theological are not anti-god. In fact, they believe in a supernatural something. It’s just that it is beyond us, so those who think they know god, well, they simply can’t. He is unknowable. Not surprisingly, nature/creation inspires this, even though there can be no knowledge, and certainly no intimacy, with the Creator. Don’t mistaken this for atheism or even agnosticism. While those isms also reveal weaknesses in religion, they haven’t done much to help anyone. Such fruits and the agitating attitudes leave too many empty. This Post-Theological self-authorized spokesperson doesn’t want any dogma, from Christians, Muslims, Hindus, or atheists. That’s his dogma—no dogma, and he’s very dogmatic about it!

The author also has an evolutionary world view, so something as old as the Bible can’t be as accurate or valuable than something written during the Enlightenment or even more recently. This also makes his current perspective better than anything that has preceded it. While this may seem hopefully egocentric and juvenile, at least it’s honest. Because we are getting better and better (hard to buy that right now), we will continue to evolve into a great world. There’s no need for Jesus to return, in fact there’s rarely a mention of Jesus in the book at all. The whole Christ-event—Immanuel, completely disproves the announcement that the supernatural can’t be known. But now I’m countering and reacting to the author rather than listening.

I definitely recommend that religious people read this to get one person’s honest appraisal of why so many people just don’t care about religion any longer. We would do well to draw out perspectives from other Nones rather than passing them off as thoughtless and without a belief in some the supernatural or being faithless. Like Paul on Mars Hill, they need to discover the “unknown god.” Reading this book might help those who are religious to listen better to those who aren’t.