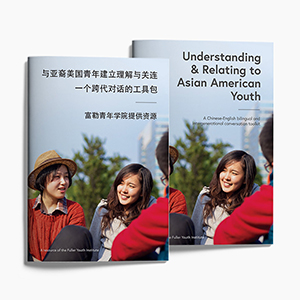 Here’s a great resource for understanding and relating to Asian American youth, particularly for parents and those who work with Asian youth ministry. Fuller Youth Institute has done a terrific job for this unique portion of the American population. The book acknowledged the diversity of cultures within the term “Asian American” while highlighting some commonly shared experiences, challenges, and opportunities among today’s young people. The book described issues such as questioning one’s identity (Who am I?), belonging (Where do I fit?), and purpose (What difference do I make?). Those questions confuse young people today, including Asian American youth.

Asian American youth differ from their immigrant parents. This next generation typically lacks meaningful connections to the “old” world. That makes them unlikely to consider their “home” country as a place to return or a point of reference. Instead, the standards of their new country are the criteria they use to evaluate themselves. And those same criteria are what others in their expanding world use to evaluate them, too. Given that children of contemporary immigrants will be part of the future American society, how are we to understand these children’s adaptation to their role as citizens and full participants in American society? Has the younger generation of today’s immigrants been able to assimilate into American society, following the path initiated by their parents and then advancing beyond their parents’ generation?

The “new generation” technically refers to the children of contemporary immigrants. The emerging literature on the new generation, however, has discussed not only United States-born children—the true new generation—but also contemporary immigrant children who arrived in the United States before they reached adulthood. The main characteristics of this new generation depend on the age of the children when their parents bring them as immigrants. Immigrant young people are extraordinarily diverse in national origins, socioeconomic circumstances, and settlement patterns. If they are pre-teen or younger, they seem to naturally mirror United States-born children of immigrants. But if they immigrate when they are in their teens years or older, they spend more time adapting to the new environment and culture.

The book argued that various communication problems exist in the family. Often when parents ask a question in their native Chinese language, the children respond in English. After speaking English in school all day, the children feel more comfortable with English than with their parent’s mother tongue. Quite naturally all members of the family experience much frustration with the difficulties in communication that arise out of this bilingual situation with opposite preferences.

The struggle from cultural disparity creates tension between immigrant parents and their Americanized children. Asia American young people must first receive understanding and support from their parents. But how are immigrant parents to understand and support participation in a culture that differs from what they prefer or deem non-negotiable? When the struggle of the children with their bicultural identity is met with criticism, negative labeling, and constant bombarding of pressure to submit to traditional, “old world” cultural standards by parents and community leaders, it hinders the developmental process of the children. This can easily lead to feelings of rejection by both cultures, which often results in psychological pain.

According to this book, help from a youth minister can contribute a great deal to uprooted people. The role of the Christian church to the adaptation of post-1965 immigrants to the United States has been documented by scholars. Christian institutions have been an important dynamic in the lives of new immigrants, both as a venue of ethnic reproduction and as a force for assimilation and change. Christians have played a role in the adaptation and assimilation of immigrant Asian American youth in traditional Protestant congregations in America.

The book from Fuller Youth Institute in Southern California, has direct ramifications for Asian American immigrant families and congregations. I pastor the Los Angeles Chinese Seventh-day Adventist Church, and the principles enunciated here are the ones that have proved successful in our immigrant and second and third generation Chinese-American children. The principles could also apply to other immigrant nationalities.