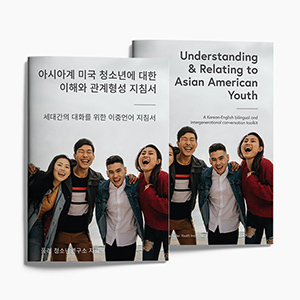 This pamphlet is a useful tool in helping churches to better understand Asian-Americans and to minister to them. It’s available in both English and in Korean. It begins by defining “Asian-Americans” and explains how to better understand the mindset of this particular culture. It addresses the difficulties and challenges that Asian-Americans go through in this country as others label them with certain stereotypes. The two stereotypes mentioned in the pamphlet are the “model minority myth” and the “perpetual foreigner label.”

It would have been nice if the pamphlet went a little bit deeper addressing the challenges of Koreans as this pamphlet written in both English and Korean. The pamphlet mentions in the beginning, “Asian-Americans are not a monolith, but include people groups from East Asia, Southeast Asia, South Asia, and the Pacific Islands” (p. 7). Grouping these various countries into a “Korean” pamphlet misses the point. The cultures vary, as do physical appearance of these Asians. This pamphlet does not accurately address all the issues for Korean Americans but simply generalizes the issues of all Asian-Americans.

This does not mean this pamphlet lacks value. I am an Asian living in the United States and I have two young daughters who were born here. This pamphlet addresses many of the issues I will face as my wife and I raise our children in this country. Whether you are living in a major city with a multi-ethnic setting or living in the countryside as a minority among one primary ethnic group, this pamphlet can be a useful guide for parents and ministry leaders.