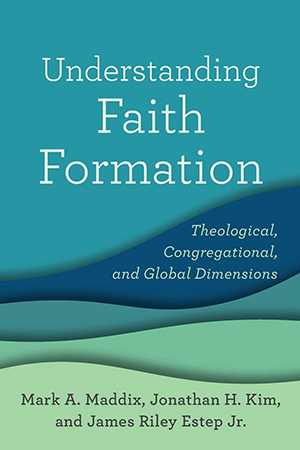 You might find the book title inviting or intimidating. The word “faith” certainly grabs the attention of many youth and young adult leaders. “Understanding” might sound promising or hollow—perhaps based on your own experience from previous proclamations promising an understanding of faith. But that word “formation” scares some while it entices others. The subtitle grabs academics, but might lose others. The three co-authors all completed their doctorates at Trinity Evangelical Divinity School, and all three are ministry professors and/or administrators in various evangelical schools. Consider this an academic perspective on growing faith, from an evangelical perspective. The book isn’t long, and it’s not a difficult read; but you will need to focus your attention while reading it. They stated their target group as educators, pastors, and church leaders, to provide understanding and to practice their faith more deeply. This sounds hopeful and helpful.

The subtitle names the three sections of the book: theological (don’t let the word intimidate you), congregational (the comfort zone for many), and global (not as familiar now as we hunker down during this pandemic).

The first section, theological dimensions, wrestles with the word “faith,” including Hebrew and Greek words and previous understanding. Largely a religious term, evangelicals place a high value on faith, but what does faith entail? Religious people typically think of synonyms like believe, trust, fidelity, along with hints of growth, development, and maturation. Should faith be classified as thought, feeling, action, or some combination of all three? If combined, do all three hold equal weight? Today’s popular term “spirituality,” can be traced to relatively recent times—the 17th century—even though the term “spirit” receives obvious mention in Scripture, especially in the New Testament. Church history shows different emphases in faith as well as growing faith. From the church Fathers through the Middle Ages in Christian Europe, and the Reformation, all the way to our current “Moralistic Therapeutic Deism,” the authors explain both faith and how it grows, at least with the perspective of the times.

The authors critique James Fowler’s seminal Stages of Faith (1981), acknowledging its value, but pointing out the weakness of a developmental model, especially one based on psychology rather than theology. Indeed, Fowler’s work mirrored much of Lawrence Kohlberg’s stages of moral reasoning—Fowler and Kohlberg served as colleagues on the faculty at Harvard. Fowler’s faith stages tend to primarily be cognitive more than behavioral—thought more than action. In its place, the authors provide a four-stage model of faith formation that includes head, heart, and hand/action. As evangelicals, faith must also include naming Jesus Christ as savior and lord. They also emphasized God’s initiative and supernatural involvement in contrast to simply growing through stages “naturally.”

The second of the three sections in the book deals with congregational faith formation. Challenges posed include secularization, post-modernism, and specifically MTD (“Moralistic Therapeutic Deism” from Smith’s National Study of Youth and Religion, reported in Soul Searching in 2005), and the rise of the “Nones” (see James Emory White’s The Rise of the Nones in 2014). Not surprisingly, this results in an embarrassing Biblical illiteracy. The authors suggested a cognitive response of challenging Biblical thought and education. I would think a relational approach would form a better entry point, but not these Evangelicals co-authors. However, they do emphasize Scripture for faith “formation” rather than faith “information” including spiritual practices that rely on an active Holy Spirit as one reads and contemplates Scripture. One other congregational model that seems comprehensive places worship in the center with surrounding influences of fellowship, proclamation, justice, and mission/service. While some may lean more toward one than the other, the conglomerate and interactions seem vital for spiritual formation.

The final section of the book presented global dimensions, starting with short-term mission trips. The enthusiastic endorsement sounds like they went on one such trip and received the full benefits of it. Those who have participated in multiple mission trips move beyond the benefits of the mission trip for the volunteers and start to ask what the real benefit is for the nationals being served. Is their role simply to make the rich Americans feel good? What about those who return home and return to their previous lifestyle, at least until their next short-term mission trip? Such questions don’t get raised in this book.

Another topic in the global segment included forming faith in multiethnic contexts. Here the authors went to great pains to differentiate between multiethnicity and multiculturalism along with assimilation (melting pot) and acculturation (mosaic). The presentation sounds like a seminary class lecture more than shedding light on faith formation.

The authors raised the question whether or not diversity in the church is okay. Their point seemed to be that sociologically we often experience a divide because we view this only from a psycho-social perspective, while the authors want to view it theologically. For support of diversity they present the Trinity as one God having diversity in three persons. I think the opposite case could be made with equal strength using their example—the Trinity demonstrates unity as a singular God. A cursory view of Acts got summarized as a diverse international and intercultural church demonstrates theologically that God values diversity. Is that a theme you would glean from the book of Acts? It made me wonder why the Jew-Gentile issue remained a consistent theme in Acts and in many of Paul’s letters as he labored to bring the two together by claiming Christ had broken down the wall between the two. Perhaps God values diversity more than humans do.

After the third section, the book ended abruptly, with no review or summary or integration of the three sections. That would have been helpful. While I found myself cheering for certain sections and challenging others, I found the book to be a helpful tool, true to its title Understanding Faith Formation.