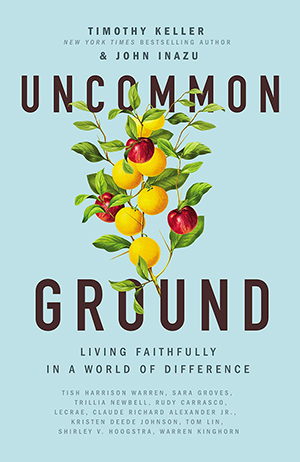 “Are you for us or against us?” Such a question might not be said outright, but the current climate, at least in America, keeps this close to the surface. Whether the issue is race, politics, sexual identity, immigration, pandemic attitudes and practices, or economic policy and hierarchy, we seek solidarity while we live in a world of differences. Social media pushes this exponentially.

This often demands instant prioritizing since joining forces with others on any given cause requires lowering other preferences. In order to fit in, you might have to give up, swallow, or hide what has been important to you. Does anyone notice the irony that forming a group necessitates giving up some individualism while standing up for individualism becomes hypocritical when others join you?

In America, religion has taken an undeniable hit, at least in the public square. Pushing it to individual choice and personal practice, discussion rarely ensues. And yet millions of Christians in America interact with those who have no interest in God, and do so on a daily basis.

Keller and Inazu’s edited work, Uncommon Ground, draws on a dozen Christians in various walks of life, from theologian to songwriter to administrator to professor to rapper to pastor or priest, to share their perspective and story. The question addressed shows in the book’s title—How can Christians connect with people who differ from them in the ways Jesus did? We who bear the name “Christian” certainly have a role model. We can evaluate our current practices by comparing them to the full Gospel record. The three words humility, patience, and tolerance encapsulate each contributor's challenge from their own experiences. They testify that one can speak with both conviction and empathy across differences. But using a bull horn from a safe distance for a short time epitomizes the opposite tack needed to sail through uncommon spaces.

The three keywords call for further explanation. Humility recognizes and admits that being able to “prove” one’s point or leaning might not be possible, especially in light of fundamental differences. Human reasoning has its limits. Can you say, “I don’t know it all”? While one’s confidence in God need not waver, such confidence in our understanding would place us in the role of God to others. A high view of God precludes such a posture and should result in humble confidence.

Patience taps into hope, expecting more than the immediate, investing in dialogue, actively listening, deepening understanding, discovering other perspectives, and questioning to find more rather than combat uncertainty or differences. Identifying common and uncommon ground means we walk the same pathway, but not always the same ground. We all journey, but not at the same rate or place at any given moment. Life is a journey, not a race. A Christian’s hope in God provides hope for others and oneself as we release instant resolution or rely on short-cut absolutes.

Tolerance accepts a person’s right to think independently without demanding they adopt your perspective. Tolerance should not be equated with accepting beliefs or practices that run counter to one’s own. But distinguishing a person’s ideas from being a person made in God’s image is a good place to begin. Reflecting on changes in your own thought (you have experienced that—right?!) includes tolerating those who think and act differently than you. For the Christian, the call to love takes us even beyond mere tolerance. But tolerance might be your first step.

As with any edited work, some contributors will resonate with any given reader more than others. To put the principles into practice, it might be wise to re-read the chapters you wouldn’t label as consonant with your own. Practice listening to someone on uncommon ground without being fearful, fighting, or fanatical. Retain your faith and flexibility and fine friendships might forever flourish.