Book Review: The Post-Quarantine Church: Six Urgent Challenges + Opportunities That Will Determine the Future of Your Congregation 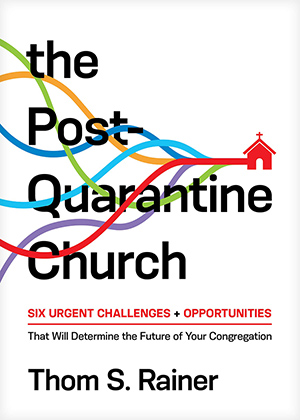 With no claim of a magical, Christian crystal ball, Thom Rainer believes some handwriting has already been written on the walls. Even though many people maintain a wait-and-see posture regarding ministry during and after the coronavirus pandemic, those who venture forward are the ones most likely to capitalize on the next chapter of life as it unfolds. Admittedly, there will be mistakes and miscues, but several things indicate trajectories that pastors and congregations can note right now.

One of Rainer’s previous books, Simple Church (2011), challenged churches and their leaders to simplify their churches by dropping the dead wood of programming “because we’ve always done it this way.” Like an efficiency expert, he instructed and chided churches to have a friction-free ministry with a minimalist strategy of mission-driven ministry. All other elements should cease. He refused to equate busyness with holiness.

The pandemic may have done what many churches had failed to do, and possibly thought wasn’t possible. Many ministries have ended. Churches who intend to go back to whatever they were prior to the pandemic bypass the golden opportunity to move forward rather than backward. After a year of the pandemic, fewer and fewer people actually think there is chance to go back to those “good ol’ days.”

While some churches continue to struggle over whether or not to return, and whether or not mask mandates challenge religious liberty or the separation of church and state, Rainer doesn’t get bogged down in those sideshows. His future focus draws on his observations and consultations with a variety of churches to imagine a new future based on trends he’s picking up right now. Here’s a quick overview of the six he identified in this book.

Gather Differently and Better. Instead of gathering only for a worship service, the quarantine has shown people want to gather, but they are limited in where, when, and how to do so. Rainer suggests using the church facilities as gathering places for the community rather than a cocoon for church members. Listen to people in your community and you will find they want a place to sit and have wifi hotspots, and even room space for birthday parties with free clean up by church volunteers. Making the church facilities the community gathering place for small, medium, and large groups makes it the hub of life, which would include religious life as well. And the time for worship should go beyond the traditional church worship hour since that time frame doesn’t work for everyone. That could challenge Seventh-day Adventists with our Sabbath identity and significance of the seventh day.

Seize Your Opportunity to Reach the Digital World. When the pandemic shut down in-person gatherings for churches, tens of thousands plunged into an online presence. This swelled the number that had already gone online. Now, most people expect an online presence for a church. Rainer identified three groups of people who relate to a digital church. Some will connect only digitally, either because that’s their world, or because they don’t want to risk more. A second group might connect digitally, but be open to something in-person because of the initial digital connection. The third group feels comfortable both digitally and in-person. He didn’t offer a fourth group—not connected digitally. He expected that everyone has some digital connection. I’m not sure that I agree with him. But he also points out the need to think about a church’s mission to those in the digital world and not just those who physically present themselves inside the church walls. How does one take the Gospel to the world, including the world that will never come to their facility?

Reconnect with the Community Near Your Church. Ironically, with a digital church that can connect anywhere and anytime, the hand-on church now has the chance to re-set locally. Over time, existing churches served members who may have moved out of the neighborhood so the membership transitioned to a drive-in church rather than a community church. Physical distance reduced engagement. After the quarantine, physical distance must be reduced. Existing physical churches must rediscover their physical community and make their connections proximal.

Take Prayer to a New and Powerful Level. Based on the beginning of the early church as recorded in Acts, Rainer sees prayer as foundational for a church’s existence and ministry. Crisis often draws people toward prayer, and the pandemic certainly has created a crisis. With digital connection, praying together became easier in terms of access and frequency. But with the ebb and flow of church life, a prayer ministry might be intense for a while and then pause somewhat, Rainer wonders how a congregation might sustain a strong prayer life and ministry.

Rethink Your Facilities for Emerging Opportunities. Most congregations regress toward ministering to themselves. Their budgets and facilities become less and less about others, and more and more about the members. With the pandemic, the facilities simply sat empty most of the time. But that’s not very different than their use prior to the pandemic. Who owns a facility that is used only once or twice a week? Not a vibrant entity! Let the pandemic shift the priority of the facilities from the church members to the community. Use the facilities. Rainer suggested that church members get the pulse of the community to decide how to repurpose the use of their facilities rather than dictate a specific plan for all churches to do it the same.

Make Lasting Changes That will Make a Difference. With the abrupt change in churches caused by the coronavirus, what will happen post-quarantine. Rainer warned against embracing the false comfort of the few who want to return to the way things were pre-quarantine. But he also acknowledged the future is murky, and long-term plans might be in terms of months rather than years, at least for right now. Without naming it, his description flies in the face of “Growing Young” pre-pandemic in which “planned culture change” over a period of three to five years simply won’t cut it now. In fact, Rainer stated that culture change comes at the end of many action steps, and that action steps should be what the church is about rather than waiting for culture to change or trying to chip away at it. He sees the ones who actually lead the church will be those who can discern and align with the future, even if it might be the near future rather than the distant future.