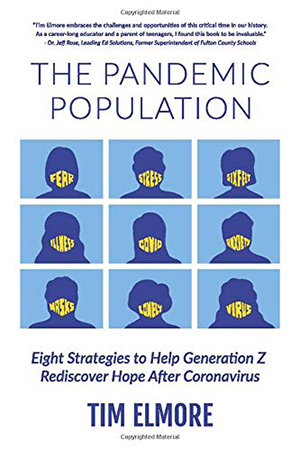 None of us were around 100 years ago for the previous pandemic, so we’re woefully unprepared to deal with it now in our minds, hearts, or souls. We just want it over; but it’s not. We pray and wish for it to end, but it hasn’t. We argue about masking or not masking, getting vaccinated or not, science or faith, care for others or personal freedom, but we continue to be dominated by a virus that we can’t see, but can see its effects. That could be eerily spiritual in some senses.

Gen Z hasn’t been impervious to this. The end of the 2020 school year and graduations, summer plans, and the 2020-2021 school year have made this an adolescence to remember (or perhaps forget). With the first wave of the coronavirus, senior citizens seemed hit the worst. But the fallout impacted Gen Z as well, especially with public health declarations that fluctuated on a daily basis. With the delta variant of the coronavirus, Gen Z feels the impact more directly. Tim Elmore wrote his book before the delta variant struck. The content seems even more pertinent now as we continue to hope to “turn the corner” one of these days.

Those who have heard Elmore speak or read his previous publications expect his wit and wisdom with memorable sound bites and a clever turn of a phrase. For example, “There’s always a trade off when we choose worry over wisdom” (36). To empower young people, he suggested, “The more we govern and prescribe the agenda, the less they feel hopeful and the more they feel helpless” (39). Drawing on difficulties from The Great Depression of the 1920s, Elmore characterized people then as those who ”Didn’t focus on what they lacked, but they focused on what they loved. Instead of complaining, they started creating. . . . What began as survival became success” (51). When it comes to helping young people shape positive, post-pandemic narratives, thoughtful adults could have them start by having youth “list their ‘blessings,’ cultivating an ‘attitude of gratitude.’”

In an easy-to-read, fireside-chat style of writing, Elmore drew on how previous generations dealt with hardship and compared that to helicopter parenting and its impact on Gen Z today. Because of their emphasis on protecting, parents have come short in preparing their children for current challenges. Tim distilled six qualities from the “Silent Generation” (which some refer to as the “Builder Generation”) and suggested these would match well for what Gen Z faces because of the pandemic. His six B’s are: Be humble, Be grateful, Be a good worker, Be kind, Be resilient, and Be resourceful (22-23).

In the chapter “A Pandemic is a Terrible Thing to Waste,” Elmore modeled his optimistic perspective by identifying previous pandemics throughout history and how some people made the best of their unfortunate fate. In one outbreak of the Black Plague in London, where 25% of the population would die, Isaac Newton couldn’t continue his studies due to quarantine (sound familiar). Instead of doing nothing, Newton transformed his interruption into an introduction of new discoveries, returning to Cambridge with new theories he developed during quarantine. What an excellent example! But how many Isaac Newtons were there?

Balancing the positive and negative in a later chapter, Elmore posited three negative and three positive impacts on the orientation those in Gen Z might take because of this pandemic. The negative included the normalization of isolation (quarantine), a scarcity mindset (use your hand sanitizer bottle sparingly), and panic/anxiety (remember the run on toilet paper?) He presented three positive impacts as expansions—an expansion of responsive service workers (the new heroes), saving/giving (donating a government check to charity), and resourcefulness/innovation (consider online options that exploded).

Today we are familiar with the term PTSD (Post-Traumatic Stress Disorder). Before this diagnosis arose in the military, it had other terms such as “shell shock (WW I) and “Post-Vietnam Syndrome” (Vietnam). Certainly not limited to war trauma, many experience it simply from living on this planet. Elmore referred to John Tierney’s The Power of Bad which reported studies in the 1990s in which four out of five people who suffered trauma did not end up with PTSD, but with PTG (Post-Traumatic Growth)! The trauma didn’t cause the growth, but how people responded to the trauma resulted in growth. Elmore identified seven recommendations for positive growth when faced with trauma, such as the pandemic.

The practical suggestions and positive tone, combined with plenty of examples, make this book a helpful tool for Gen Z and other generations as well. Elmore often speaks to student leaders on campuses. While he is a Christian and does work with Christian groups, this book says nothing of God or spirituality. For those with a religious perspective and with an increasing interest in spiritual topics, he missed a grand opportunity to wrestle with God-questions and the pandemic. With a growing number of young people getting infected with COVID, it’s no longer simply a matter of inconvenience or being put on hold. Young people now find themselves directly affected physically in addition to emotionally and socially. Being positive is good, but being spiritual would be even better.