Book Review: The God Equation: The Quest for a Theory of Everything 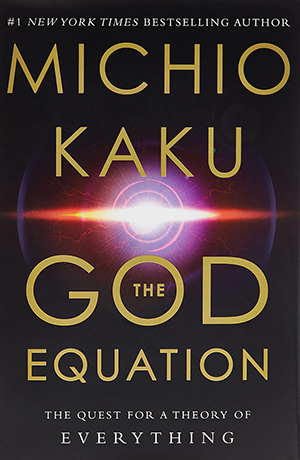 The God Equation: The Quest for a Theory of Everything by Michio Kaku. Doubleday. New York. 2021. Total pages: 198.

The book title sounds spiritual. The subtitle draws on the scientific search in physics from the past century. Why include something like this for youth and young adult ministries?

If your experience with God draws on a relational and social bent, it’s likely you emphasize having a personal relationship with God and the impact this will have on your interactions with others. But what about those with a scientific bent? Do you ignore such people or stereotype them as “nerds”? Do you avoid conversations about evolution, the age of the earth, and the Big Bang?

It might seem hard to believe that science, formerly “natural philosophy,” attracted simpler minds than the wonderful world of philosophy and religion. But a century ago science emerged as the preferred term and began a search of discovery in which humans could determine what is true and what isn’t through a scientific process. The “God of the gaps,” explains the unexplainable as “God,” but then shuts out God as science finds better explanations and removes the gaps. The result is more and more science, and less and less God. The next step becomes a choice of science or God, as if the two are incompatible.

As a person involved in youth and young adult ministry, you should have some exposure to science. Kaku’s The God Equation provides a recent overview of the past century of scientific discovery, primarily in the field of physics. The introduction acknowledges the classical Greek idea of the four elements—earth, water, air, and fire—interacting as “atoms” on the smallest, indivisible reality, but invisible to humans. Kaku quickly moves through Newtonian physics and begins in earnest with Einstein’s 20th century’s version of the four forces—gravity, electro-magnetic force, the strong nuclear force (holding protons and neutrons in the nucleus of an atom), and the weak nuclear force (the decay of unstable subatomic particles). If that last sentence makes sense to you, you’re ready to continue. If it doesn’t, you really, really need to read this book (and, if needed, google some of the terms as you go).

Newton’s discoveries led to practical implementations that spawned the industrial revolution. Faraday and Maxwell’s discovery of the electromagnetic force led to electric motors as well as radio and television and other forms of communication. Einstein wanted to find a simple and elegant equation, less than an inch long, that would allow him to, “read the mind of God.” Einstein’s E = mc2 transformed Newtonian physics with his discovery and insistence on the theory of relativity with the combination of space and time. Then Schrodinger and Heisenberg explained quantum theory, which led to our current explosion in technology.

Toward the end of the 20th century, the “Standard Model” seemed to explain everything, at least from a physics perspective. The only thing “missing” from everything was: it didn’t work wherever there is gravity (even “zero gravity” has gravity). This is where theoretical physicists sound a lot like theologians—in their own little world they have completely explained God in their own terms, but it doesn’t necessarily relate to how we live our lives.

By devoting a full chapter to “The Dark Universe,” current understanding of “dark matter” and “dark energy” reverses the shrinking “God of the Gaps” model. The adjective “dark” means humans are in the dark about this—we simply don’t know. “Dark matter” refers to the gravitational pull that’s affecting not only our solar system and galaxy, but the entire universe. You can’t actually see it, but there’s something at work whose effects remain undeniable. Does that sound like a description by science or religion (see John 3)?

Dark energy comes from, well, no physicist knows, but it started about five billion years after the Big Bang and it continues to expand the universe. Instead of slowing down five billion years after the Big Bang, things picked up. But physicists have confidence they can account for all the atoms in the universe—all planets, stars, and other objects. This amounts to five percent of the universe. Dark matter accounts for 27% of the universe and dark energy accounts for 68%. This can be rephrased as, “Human understanding accounts for only five percent of reality, so the gap of human ignorance is now at 95% of everything.”

Kaku’s favorite part of physics deals with string theory—his PhD dissertation topic and his personal study for more than 40 decades, and the co-founder of “string theory.” The beauty of string theory physics is its symmetry to the point of “supersymmetry.” Amazingly, something can remain the same, and yet be completely transformed. Physicists call this “string theory.” Christians call it “conversion” or the “new birth.” While string theory does include the force of gravity, one continuing missing element for this theory is that physicists don’t have any idea how to test it in reality. It’s only a theory. But it certainly looks good, theoretically! Oh, and it takes place in 10 or 11 dimensions rather than 3D or even 4D (3D + time) and maybe a multiverse rather than only one universe.

The last chapter of the book engages in the “God question.” Kaku labels himself an agnostic as one who thinks there must be a God, but he doesn’t know him (yet). As a string theory physicist, the elegant design of string theory leaves him in awe of a cosmic designer. Drawing on the 13th century theologian Thomas Aquinas’ “cosmological proof” (indicates someone or something started the universe in motion), Kaku agrees. He referred back to Einstein’s understanding of a god of order, beauty, simplicity, and elegance. String theory fits all of that, which takes us all the way back to where things began: “In the beginning God created the heavens and the earth.”