Book Review: The End of Adolescence: The Lost Art of Delaying Adulthood 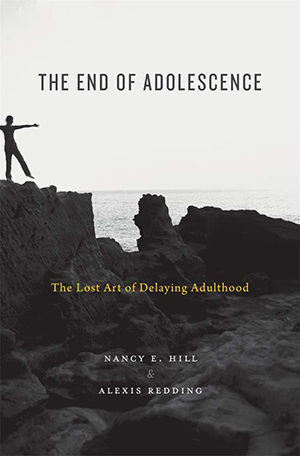 Titles such as The Child-Man, Failure to Launch, and The Peter Pan Syndrome describe a generation delaying adulthood. Popular and academic media seem to blame the overprotective and controlling demeanor of “helicopter” or “snowplow” parents for such developmental delay. Furthermore, Gen Z’s delay in reaching adulthood often gets contrasted to Baby Boomers–the post-World War II generation–since Baby Boomers generally met the adulthood markers much earlier than Gen Z does today. The authors argue that the circumstances that surrounded the post-WWII generation–The GI Bill of Rights, a booming economy, and housing accessibility, among other factors–made that decade for that generation atypical (3, 184).

Nancy E. Hill and Alexis Redding are professors in the school of Education at Harvard University and experts in adolescence and collegiate development. They maintain that the five markers of adulthood (leaving home, completing one’s education, entering the job market, forming intimate relationships, and becoming parents) are much more difficult to achieve today than in the 1950s and 1960s. Furthermore, they advocated for delaying adulthood as an art to be embraced rather than condemned.[i]

Due to globalization, technology dependency, and workforce mobilization, young people today need better training to gain the necessary skills to succeed (4). Therefore, youth need more intentional time to “gain experience and better position themselves to launch successfully into adulthood” (6), which some interpret as “delaying adulthood.” This is not a new phenomenon in US history. In the 1890s and 1920s, the increasing demands for skilled workers gave way to mandatory high school, which, in turn, caused youth to delay adulthood–similar to what is happening today (5).

The authors pointed out a much higher percentage of youth attend college today compared to 50 years ago. In the 1970s, eight % of women and 14% of men pursued college after high school. In 2016 that number rose to almost 70%, with women outnumbering men entering higher education (187). Part of the explanation for this enormous increase involves the change from an agrarian to industrial to information economy and society. The authors suggested a situational context better explains the current seeming delay of adulthood (4).

Besides the academic discussion of terminologies–Early Adulthood versus Emerging Adulthood–the authors offer great advice for parents, teachers, and anyone interested in the lives of today’s young people. For instance, youth need time away from home–ideally with parental support–in order to take a hard look at identity and purpose. Young people would benefit from parental sympathy in the form of non-judgmental active listening. Also, students described three types of mentors: 1) Mirrors—often close friends and family members who informally mentor and convey reality checks; 2) Windows—adults who can show students multiple possibilities for their careers; and 3) Guiding Lights—mentors who can direct the path of students once they have chosen a vocation.

High schools have capitalized on Advanced Placement (AP) classes to shorten students’ time (and money) in college. But since the transition from adolescence to adulthood includes more than academics, time for discovery, reflection, and refinement, as well as extracurricular activities, are as crucial as knowledge acquisition. One expects the same would be true for discipleship formation.

Some arguments in the book sound contradictory, while others beg for further innovative research, analysis, and applications. For example, If delayed adulthood came from industrialization, has it always existed in society as normative as it is today? Or, if attending college extends entry into adulthood, is college part of the solution or part of the problem?

For practitioners and parents concerned with the bottom line, this book seems to reinforce what common sense and ministry practices suggest: young people need adults in their lives. By inference, it compels the practitioner to become a mentor-connector, welcoming other life-enriching adults into the lives of youth.  This also reinforces the campus ministry mantra that the college years are crucial for identity re-exploration—a compelling reason for churches to consider higher education campuses as a tremendous missional opportunity.

[i] “This ability to gain financial independence largely drives the other markers of adulthood.” (4)

[ii] The trigger for this study was the 2015 discovery of a longitudinal research headed by Dr. William Perry from 1953 to 1979. The research was long forgotten by the time it was discovered in an attic at Harvard University. The researchers used the transcripts from the 1975 class because it was more complete and better documented than the others (193). This small cohort received the name of Gen. Jones due to their unique place in history, neither Baby boomers nor Gen Xers (vii).