Book Review: The Deeply Formed Life: Five Transformative Values to Root Us in the Way of Jesus 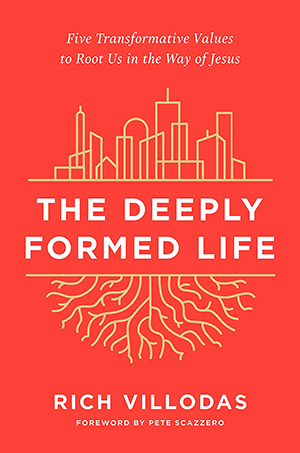 Most books on spiritual formation describe the importance of personal piety and even a monastic withdrawal from regular life in order to spend time with God. Various spiritual practices get explained, followed by a challenge for the reader to follow suit.

Rich Villodas takes a very different approach. Brooklyn-born from Puerto Rican descent, he grew up on the streets of New York, and they weren’t the nice streets. In his late teens he experienced conversion at a Pentecostal gathering he attended because of his romantic interest in the pastor’s daughter. From that transitional moment, Rich has experienced a variety of life-shaping elements. These include singing Taize as well as Black gospel music; praying with Trappist monks to start the day and shouting with Pentecostals to close the night.

He joined the pastoral staff where Pete Scazzero served as the lead pastor. You might recognize Scazzero as the author of Emotionally Healthy Spirituality (2006). Villodas is now the senior pastor, and the “New Life Fellowship Church” in Queens has 75+ nationalities represented. The nearby ATM offers fifteen languages, with the local hospital having 100+ languages. Rich lives and ministers in a highly diverse urban setting, which is quite different than a retreat setting.

The book presented five values, with two chapters for each. The first chapter explained the value with support from other authors and Scripture. The second chapter provided multiple, practical examples of how to implement this practice. Rather than seeking one “silver bullet” as the singular answer to growing spiritually, Villodas prefers the metaphor of the root systems of redwoods that grow very tall by sending roots out wide and intertwining rather than one taproot going down deep.

If you were to limit yourself to five key values for spiritual formation, which five would you choose? The five this author selected are contemplative rhythms, racial reconciliation, interior examination, sexual wholeness, and missional presence. I can’t think of any place I’ve seen this combination as the recipe for spiritual formation. It seems much more congruent with daily living and integration rather than spiritual retreat. It certainly has been shaped by the author’s experiences, which he drew upon to illustrate without having to make himself the hero.

Contemplative rhythms might sound nice, but few in an urban setting would consider that realistic. That’s what makes the second chapter of each value so practical. He spent eight pages explaining ways to live the Sabbath. While Seventh-day Adventists might embrace the mention of “Sabbath,” the practices he drew upon from Scripture sound quite different than the hurried rush SDAs often experience on this weekly “day of rest.”

Racial reconciliation challenges highly diverse congregations. It should challenge those that aren’t. Theologically, if sin separates, and if God is lord of all and seeks for his people to be a blessing to all (Gen 12:1-3), then racial reconciliation becomes foundational rather than extraneous. The problem isn’t new, simple, or completed quickly. That matches the historical, nuanced, and long-view realities of spiritual growth.

The value of interior examination probably came from Pete Scazzero’s influence. Spirituality isn’t a part of life; it permeates life. That means other elements in life impact one’s spirituality. The frequent disconnect of emotional hurt and spirituality often makes religiosity an external show or sham. Spiritual health involves health for all aspects of one’s life.

The author embraced sexual wholeness as one of his five values for a deeply formed life. Instead of narrowly focusing on current debates regarding LGBTQ+, his broader perspective exposed the superficiality of separating the physical elements of sex from the whole person. Drawing on Christopher West’s three diets of sex, he critiqued the “starvation diet” of rejecting, suppressing, or ignoring our sexuality. The “fast food diet” also received bad marks for its superficiality and brevity which makes sex the end point or goal. That set up the third diet of a “banquet” and all that goes with it. This requires time, investment, involvement, complexity, and a comprehensive approach.

He also drew on Marva Dawn’s two visions of sexuality found in the first two chapters of Scripture. Genesis 1 presents social sexuality with humans made in the image of God and relating to all of creation with fellowship. This broadens sex and includes singles as well as those who are married, divorced, and widowed. Genesis 2 presents genital sexuality with a man leaving father and mother and joining his wife in one flesh of covenantal union and love. This involves self-giving beyond one’s self as well as the vulnerability of giving one’s self completely to another. In today’s fast-food diet of sex, many have sought the fellowship of social sexuality, but did so through the genital sexuality and found they didn’t experience fellowship. In many ways, people who are single can experience their God-given sexuality in multiple ways through social sexuality rather than genital sexuality. All are invited to the banquet!

“Missional presence” is an understanding that goes back to the early Christian church and received renewed emphasis at the turn of the millennium two decades ago. The idea is that we join God’s mission rather than coming up with a mission statement for our own church. It changes from “taking to the gospel to others” to “identifying what God is already doing” and then joining him when we go someplace. For example, instead of sharing your faith at work with all of those non-Christians, look at what God is already doing at your place of employment, and join God’s mission there rather than introducing it as something only you have. While the “missional church” movement from two decades ago created consternation for some, it seems to have been more like a fad with the Baby Buster iteration of Christianity. I still appreciate and believe that we get to join God’s activity rather than be the ones who take God’s activity where God isn’t present. Villodas explained it well, and provided helpful applications once again.

The Deeply Formed Life offers a new perspective on spiritual growth, especially for those who don’t or who can’t be retreat monastics. For those who live in cities or suburbs, this might be the pathway where you already find yourself. It can provide the tools to grow spiritually right where you are.