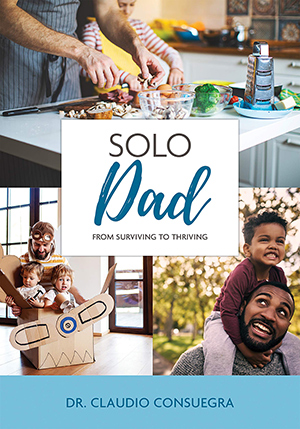 No one expects that solo dads will ever be solo moms, and vice versa. Drs. Claudio and Pamela Consuegra, co-directors for family life for the North American Division, wrote separate books on this topic. Each wrote specifically for those of their respective gender—single mom or single dad. As mentioned already in the book review for Solo Mom, the material would be helpful for all people, not just single moms or, in this case, single dads.

The core messages for both books remain consistent. The artwork, photos, and examples change appropriately. Addressing the personal needs and outlook of a single parent launches the first chapter for both renditions. Both challenge the single parent to take God’s perspective of them rather than what others may put on them. For solo dads, the author uses analogies from sports. When illustrating the challenge of “juggling many things,” the male version included juggling chainsaws. But the message of how to do finances remained the same, even though males, on average, make more money than females doing the same jobs in the United States. For those separated or divorced, the change in finances usually drops them into a financial disadvantage compared to when both parents lived together.

It makes sense to keep the primary principles consistent whether the single parent is male or female. Practical ways of purposely placing God at the center and pivot point for how to do family as a single parent remain significant, whether you are a solo dad or a solo mom. Practicing an “attitude of gratitude” applies to both genders. Practical examples such as writing down one’s blessings, verbalizing thankfulness, hand-writing a letter, offering prayers of thanksgiving, and even utilizing a gratitude reminder such as a pebble on one’s dresser or in one’s pocket can be helpful for anyone—solo dad or solo mom (or anyone).

Solo Dad includes some elements unique for dads. For starters, since solo moms are more common than solo dads, being a single father often carries a stigma with judgmental attitudes, words, and actions from others. Churches are not exempt from this. “Where is the boy’s mother?” or “Don’t you have a job?” or “A dad can never take the place of a mom in a child’s life” can easily make solo dads feel guilty, inept, and inadequate.

The many practical approaches include setting a schedule and following it. This provides stability from predictability, especially when there has been upheaval becoming a solo dad. Children who don’t yet read can still follow a posted schedule on the refrigerator or in their room with cut and paste pictures of tasks like eating, brushing teeth, getting dressed, family worship, and bathing. While some may stereotypically consider that to be more of a mom’s thing, solo dads get to play both roles. Tapping into family, friends, church, and other agencies certainly makes sense, but there are times when a solo dad is just that—a solo dad.

Some of the ten chapter titles change between the two different books. For example, “Preventing an Unwinnable War” in Solo Dad was presented as “Dealing With the Other Parent” in Solo Mom. Both chapters begin with a disclaimer that if the single parent isn’t in a shared custody situation, this chapter might not be for them. For those who do share custody, the complications and undermining and competing for the child’s love and loyalty remain hurtful for everyone. Too often the pain and anger from the split between adults continue to play out destructively for and through the child(ren). In addition to this chapter, the final chapter, which includes what Forgiveness IS NOT and what forgiveness IS, can be helpful if the solo dad applies it personally.

Even though single parenting isn’t God’s ideal, we do suffer from death and divorce. Claudio Consuegra’s book Solo Dad provides helpful medicine based on the reality of God’s love and involvement in our lives, as well as many practical applications for a solo dad’s situation. Use this for yourself, whether you are solo or not, and share snippets with fellow parents when the opportunity presents itself.