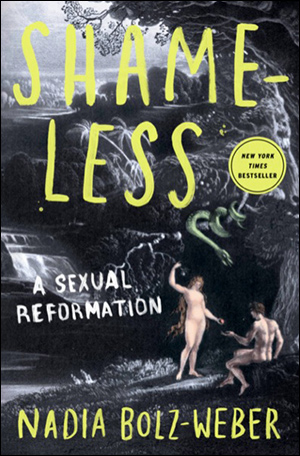 Christianity Today published an eye-catching article on February 26, 2019, entitled: “The Church Made Vagina Sculptures Long Before Nadia Boltz-Weber.”1 Such sculpture was made out of virginity pledge rings mailed to Nadia from women all over America claiming to be hurt by puritan teachings.

The preceding paragraph is enough to discourage most church goers from reading a book written by this author. However, as society has saturated the culture with messages that promote self-centered pleasure as normal and labels traditional marriage as antiquated–scarcely anyone is exempt from the exposure.

Nadia became a best-selling author by publishing her raw life struggles with drugs, sexuality and the church while reconciling them with God. Her own story and contradictions give the concerned avid learner, teacher and preacher, an insight into the lives of those who struggle with sexuality and the church, and yet seek God in unconventional ways. During her early teen years, Nadia endured bullying by developing coping mechanisms such as anger, foul language and self-destructive behaviors that carried well into her young adulthood and, to some extent, can be evident in her professional written and verbal communications. As a result of a daring conversation with a friend, Nadia ended up attending Alcoholics Anonymous where she eventually rekindled her connection with God. And that’s not all. Nadia became a church planter to the Cynics, Alcoholics and Queers; those she termed, “My people.”2 Now a divorcee, mother of two adult children and former Lutheran pastor, Nadia makes no secret of her gospel of sexual shamelessness illustrated in both her personal life as well as in those of her parishioners’.3

Shameless is a reaction to conservative-puritan sexual theology and education that has presented sex as taboo with rigid gender stereotypes and a list of rules. The author’s unfiltered and sarcastic approach makes no secret of her discontent with groups that see sex outside of marriage and any human sexual practice—with the exception of pedophilia and zoophilia—as a sin.4 Furthermore, she observes how many Christians use fear and guilt to manipulate individuals into compliance; overpromising an enhanced, guilt-free, exuberantly pleasant sexual life for those who abstain from intercourse until the wedding night.5 It is not only abortion and gender preference but also guiltless sexuality the author unapologetically defends. She declares, “Whatever sexual flourishing looks like for you, that’s what I would love to see happening in your life.”6

Nadia has called for a new ethic of sexuality, where “concern for others” serves as the moral compass going beyond the absence of unwillingness and harm. Furthermore, human beings, made in God’s image, should not be ashamed of their body and sexuality; In fact, spirituality and sexuality are linked; However, one doesn’t reach holiness by procuring purity. Moreover, Nadia, creatively links stewardship with sexuality, as exemplified in the parable of the talents in Matthew 25. Sexuality is a holy gift from God, therefore, your sexual life should be free from fear and shame.

The author does well by naming her limitations in the area of Bible scholarship, history, sex therapy and such. Nonetheless, the book could benefit from a more robust theoretical frame due to the strong criticism of sexual conservatism and, to a lesser degree, liberal theology. The author admits to having written a pastoral narrative of the challenges as opposed to a prescriptive guide of the way to proceed forward. However, the author claims to be forging a new Christian sexual ethics going beyond anecdotes while reflecting on feminist and postmodern theological views.

A sample theoretical framework alluded to in Shameless, provides key arguments for the proposed “ethic of sexuality.” For instance, in the creation account God created “male AND female,” not “male OR female.” Instead of differentiating one OR the other, the inclusiveness of AND could leave a loose definition for sexual preferences. Additionally, included in the author’s rubric is the church’s historical interpretation of male sexual domination, Imago Dei after the Fall, and freedom from guilt.

Conservative readers are most likely to be offended by this book. Nonetheless, Shameless brings to the forefront the need for a biblical sexual praxis. The extension of adolescence has undeniably created many challenges for young people, including delayed marriages.7 Marrying young,8 abstinence pledges, or vaginal intercourse substitutions seem to have caused controversy among Christians.9 Nonetheless, the Church should rally behind addressing the tough topics of sexuality in an open and honest way;10 However, should the church throw the baby out with the “baptismal” bath water?11 How can the church minister to those in the margins whose ideas and struggles about sex align with the premises presented in Shameless?

1Tish-Harrison-Warren, https://www.christianitytoday.com/women/2019/february/nadia-bolz-weber-church-made-vagina-sculptures.html (Accessed July 5, 2020).
2Nadia Bolz-Weber, Pastrix: The Cranky, Beautiful Faith Of a Sinner & Saint (NY: Jericho Books, 2013), 19-24, 9.
3Nadia shares her own abortion story and discloses that her former boyfriend is now her current lover.
4Pedophilia (adult sexual atraction toward children ) Zoophilia (a sexual fixation on non-human animals)
5The author is referring to Josh Harris, who resented his book, I kissed Dating Goodbye, separated from his wife and claims not to be a Christian anymore https://relevantmagazine.com/god/i-kissed-dating-goodbye-author-josh-harris-i-am-not-a-christian/ (Accessed July 8, 2020.
6Nadia Bolz-Weber, Shameless: A Sexual Reformation (NY: Convergent, 2019), 60.
7Jeffrey Arnett, Adolescence And Emerging Adulthood (NJ: Prentice Hall, 2010), 7-8, 247.
8Ed Stetzer, Christians in the Age of Outrage: How to Bring Our Best When The World is At Its Worst (Carol Stems, IL: Tyndale Momentum, 2018), 58. Ethan Renow, “Should So Many Christians Push To Get Married So Young? https://relevantmagazine.com/love-and-money/should-so-many-christians-push-to-get-married-young/ (Accessed July 9, 2020).
9Mark D. Regnerus, Forbidden Fruit: Sex & Religion In the Lives Of American Teenagers (NY: Oxford, 2007), 117, 181. Abstinence pledges are rarely successful among religious youth, and the substitution of vaginal intercourse with oral sex, masturbation—which, some Evangelical Psychologists prefer to tolerate rather than to stifle—and pornography, which Nadia advocates for, given the right circumstances—are frowned upon by Christian leaders.
10Regnerus, Forbidden Fruit, 214. Based on his in-depth longitudinal research, Mark agrees on the need for a revamp Christian sexual education.
11According to Tish Harrison Warren, the Early church used yonic art (vagina-shaped) and yonic baptistries to represent the new birth in Christ, not free sex.