Book Review: My Tech-Wise Life: Growing Up and Making Choices in a World of Devices 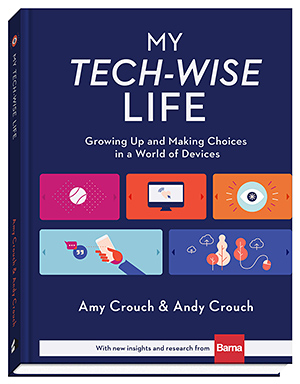 My Tech-Wise Life: Growing Up and Making Choices in a World of Devices by Amy Crouch and Andy Crouch. Baker Books, 2020. Total pages: 198.

When Andy Crouch wrote The Tech-Wise Family in 2017, it begged the question, “How will this work with an actual family?” My Tech-Wise Life by daughter Amy Crouch, along with responses from her dad, provides an answer.

Kudos to Amy for a well-written work. She gave credit to editors and the support of Barna’s personnel who asked her to write the book. Barna also provided some related statistics on tech use, especially from a study of 1,154 young people, ages 13-21. These were sprinkled throughout the book in helpful diagrams for a quick overview and support of what Amy wrote from her personal perspective.

Amy wrote with honesty from her experience in the Crouch family that put limits but not prohibitions on technology. Her chapter titles hint at taking charge of tech rather than passively allowing tech to take charge of us. Each chapter begins with “We Don’t Have to . . .” These include: We don’t have to compare ourselves, be distracted, be disconnected, live with secrets, edit our lives, avoid boredom, be exhausted. A final chapter gives a positive spin: We can live in hope. Each chapter ended with a response from Amy’s dad, Andy Crouch. Andy shared his wisdom as well as his fatherly heart with both his daughter and all readers.

One message that seemed to be part of each chapter was the need to take small steps and repeat them into a habit that shapes one’s lifestyle. Admitting mistakes and sometimes giving in, the ability to rebound or renew commitments restored hope and positive results. While tech might have intensified life, many of the issues remain the same as they have been for generations—human weakness, the struggle between right and wrong, the benefits of self-discipline, the uneven transition from childhood to adulthood, the difficulty and reward of relationships, and the freedom honesty gives.

The stereotypical fatigue from long hours into the night on tech devices describes many people to one extent or another. This includes things like watching one YouTube clip and letting it continue automatically into the next or clicking from the additional options provided. It could be moving from one Facebook post to another for older people, or Instagram and Snapchat for younger people. The antidote, according to this self-described “eight hours a night” sleep lover, has two parts. The first and obvious one is to actually sleep. That improves for those who remove their device(s) from their bed, even their bedroom—an example of a practical technique shared in the book.

The second part would resonate with most Seventh-day Adventists. Amy testified to her own experience of Sabbath as something beyond restoring physical rest. Sabbath (Did you know that’s actually part of the 10 Commandments from God?) remedies the emotional, mental, and work/study tensions that sleep alone won’t ameliorate. The author grew up in a home that practiced Sabbath on Sundays. This included family traditions and “rest” in the Biblical sense of “stopping” what one does during the week and recalibrating with a focus on God. SDAs would do well to learn how to rest rather than cramming as much spiritually neglected practices into a binge Sabbath rather than including God throughout one’s week and making Sabbath a treat rather than a spiritual treadmill.

Based on the data from the Barna research included in the book, Amy Crouch is not a normal/average teen. Her parents provided structure, something most teens say their parents don’t do. Her parents had conversations with her about tech and her personal choices—again, something most parents don’t do. As a result, Amy’s indiscretions included things like binge-watching a TV series one weekend. Many do this on a regular basis.

To be fair, Amy is part of a family with a dad who wrote the book on The Tech-Wise Family, so Amy lived in an exceptional family. As a result, the book is limited in addressing more serious addictive tech behaviors. What do you do when your son excels Minecraft and fails in school? How about if someone continues to cyberbully your child (or you)? What if your child is the one instigating the cyberbullying? What if your child becomes suicidal because the sense of perpetually not measuring up becomes too much to bear? What should a teen and/or parent do when they can’t stop the porn so readily available on one’s device?

Rather than a statistical report with norms and averages, My Tech-Wise Life serves as a testimonial from a late teen about what she experienced from parents who were intentional about using tech for its benefits rather than being used by tech and being sucked into its allure of promises that usually fall short and leave its victims wishing there were more.

For an hour-long webinar by Amy Crouch and her dad, Andy, go to https://www.youtube.com/watch?v=qbawAnNODcQ. For those who do read, or for those open to reading these eight chapters over eight weeks, this could be a great starting point for reading a testimony, sharing one’s own, and helping each other identify and practice some techniques that could lead to a wise life by being the master over tech rather than vice versa.