Book Review: Jesus and John Wayne: How White Evangelicals Corrupted A Faith and Fractured a Nation 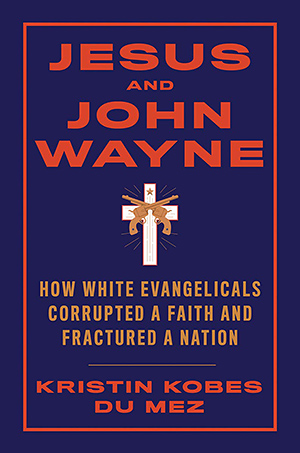 Jesus and John Wayne fits the “must read” category for those open to having the idea of American Christianity tested by the Jesus portrayed in the Gospels. While the USA faces a highly divided presidential election with attacks and sharply drawn lines, some have resorted to a favorite issue galvanizing them without considering other factors that could temper their passionate conviction.

For Evangelicals in America, some wonder how a follower of Jesus could actually support the incumbent president, while others can’t imagine anything but supporting this president for at least another four years.

For those who wonder, “How did we get to this point?” Kobes du Mez masterfully examines a seventy-five year history of evangelicalism in the United States, identifying the moments that coalesced to further empower and embolden white male dominance while casting aside the teachings of Scripture. This exposes the unlikely marriage of American dominance (MAGA) with humble Christian faith.

The author unpacks how white dominance and colonialism has driven the proliferation of Christianity in service of those who are already in power and who are hungry for more. This includes trading Biblical truths for mass propagation of Christian “culture”–a culture of traditional, white, male headship that “saves” all who are willing to fall in line under their God-ordained power. Instead of the Jesus revealed in Scripture, American Evangelicals have formed a Jesus who looks and acts a lot more like John Wayne—the rugged individual, ready to take on “the bad guys” with guns and swagger, with an inherent duty to fight and take what rightfully belongs to us (to advance the kingdom of God, of course).

Through a historical account, Kobes du Mez highlights how Donald Trump is not an exception to Christianity, but merely the newest leader to embody the traits white evangelicals have always upheld to be “Christian.” Rather than being an anomaly, Trump simply follows a long line of predominantly white male leaders who have risen to power through substituting the teachings of Jesus in the Gospels for ultimate earthly authority. Those who live by the phrase “God, Family, Country,” could easily become defensive, especially if one’s primary identity comes from being an American compared to being a Christian. (Hint: “American” and “Christian” are not interchangeable, and America is not “God’s country.”)

It is precisely this line of thinking that has led to the creation and institutionalization of the Moral Majority and hard lined divisions of “us vs. them.” This line of logic has married the church with the state. Those in power can count on receiving even more power and status in exchange for pushing ideas of individualism and paternalistic Christianity. This book unpacks and displays the idea of cultural Christianity while also laying out the deals and trades made to secure more power for authoritarian and patriarchal values.

Jesus and John Wayne underscores how we have arrived in a society that values self-improvement quotes and commercialized Christianity over a critical examination and application of Scriptural truth. This explains why Christian Book Stores (CBS) sell more feel-good types of books by Christian writers than books by theologians and preachers who plumb the depths of Scripture, including messages of prophets who spoke to power and identified with people groups marginalized by those in power.

While the topic of the U.S. election may be in laser focus as we think of what’s right or wrong with our country, she cautions us against placing too much stock that one person alone can carry or dismantle the culture we are swimming in today. Kobes du Mez challenges those who believe the values of authoritarian rule, fear of non-white cultures, patriarchy, dominance, and ambivalence toward injustice will simply disappear when Trump finishes his term(s). Think again. This president is simply the figure-head of a system that has valued earthly safety, security, and white dominance, which are unspoken Evangelical values even though they bear no resemblance to Jesus. We have the responsibility as individuals within our current culture to either be beacons of light or daggers of fear.

For those who have grown up in the church, there will be moments in this book that strike too close to home. When this happens, instead of reacting defensively, simply ask where your ultimate identity lies: in Christ or in our culture? Although this book does an excellent job of unpacking the predominate experience of white evangelicals (and yes, Adventists, too, minus Fri-Chik and Special K loaf), it falls short in examining the experience of those who grew up outside of the predominantly white church and/or outside of the United States. If you didn’t grow up watching John Wayne western movies or felt your chest puff while reciting or thinking “God, Family, Country,” this book provides a primer that explains why so many can vote based on a single issue (Supreme Court appointments or anti-abortion, for example). For those who came to America for economic opportunity, the question should be asked, “Is that God’s primary call for you?”

Who are the people we allow to speak into our lives? Are these the only ones God has sent? Are all these people white? Do they all come from what is considered a “dominate culture” (abled, middle-class? American? Heteronormative?). If so, we must ask ourselves and our community if these groups are the only ones who hold the keys to unlocking the full truth of who Jesus Christ is. Have we refused a fuller revelation of God because we refuse or don’t even recognize names of Godly messengers today such as Howard Thurman, Lisa Sharon Harper, Jeff Chu, and many others. If God is bigger than our singular idea of who our own echo-chamber says He is, we must move beyond our insulated circles of white American normative Christianity and beyond the authors featured at the ABC (Adventist Book Center) or the pop culture best-sellers on a Christian Book Store website.

Jesus and John Wayne ought to spur some unpacking of what beliefs you hold that may have simply been white dominant beliefs rather than Biblical beliefs. As Adventists who hold a deep commitment to a rigorous study of Scripture to strip away what Christians have fallen into over the years, let us expect God to continue to speak additional truth into our lives, and not limit God’s voice to people just like us.