Book Review: Handing Down the Faith: How Parents Pass Their Religion on to the Next Generation 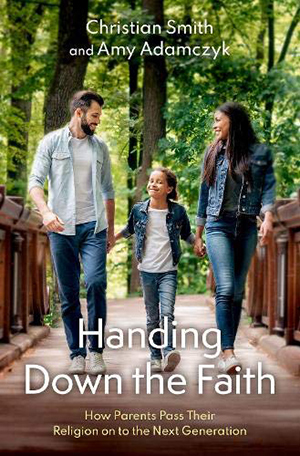 Handing Down the Faith: How Parents Pass Their Religion on to the Next Generation by Christian Smith and Amy Adamczyk. Oxford University: New York, NY. 2021. Total pages: 244.

Both the title and subtitle grab the attention of many parents and religious leaders, especially those concerned about not passing on their faith to the next generation. While transmitting one’s faith to the next generation can’t be guaranteed, most would like to “stack the deck” in their favor. The concern seems to be perpetual rather than new. For example, Roger Dudley’s Passing on the Torch: How to Pass Your Spiritual Values on to Your Children and Teens carries a publication date of 1986 from the Review and Herald Publishing Association.

Many will recognize the first co-author of Handing Down the Faith. Christian Smith teaches at the University of Notre Dame as a Christian sociologist. Some might be more familiar with his landmark longitudinal study called “The National Study of Youth and Religion” (NSYR) with four surveys and multiple publications. Perhaps the best known of these were Soul Searching (2005), Souls in Transition (2009), Lost in Transition (2011), and Back-Pocket God (2020)—all published by Oxford University Press. In this study Smith coined the term “Moralistic Therapeutic Deism” to label a generic Christianity few can articulate, but it has to do with our happiness, God as a genie, and right-and-wrong internally determined in undetermined ways.

Smith drew on the NSYR study and an additional 230 interviews in 2014-2015 for data, analysis, observations, and recommendations. The interviews included parents belonging to churches, synagogues, mosques, and temples. The religious groups can be classified as White Protestant (think White Evangelical), Black Protestant, Mainline Protestant, White Catholic, Latino Catholic, Conservative Jew, Mormon, Muslim, Hindu, Buddhist, and even 20 “non-religious” parents. While you might not try to include such a wide array, Smith did. The limitations show by drawing on parents only in the United States, and parents who are engaged in a religious community (many parents in America aren’t).

If you’re looking for an easy read, this isn’t your book. But the writers draw on many examples and relatable quotations from their interviews to illustrate their points. For those who like tables, charts, and appendices, you get access to many in these pages. Smith wrote in a very logical and progressive manner. He wasn’t cagey or intuitive. His straightforward manner states what comes in each chapter, delivers it, and then summarizes it. The plentiful footnotes give the reader immediate access to the references rather than flipping pages to find endnotes at the close of a chapter or the back of the book. Rarely do the footnotes take the majority of the space on a page, and some pages have no footnotes—surprise!

Most people readily acknowledge that parents influence their children. The focus in the book limits itself to how parents see themselves and their role as parents to pass along their faith. What are the components of this thing called “parenting” when it comes to passing on one’s faith? Rather than asking, “How many of your children attend religious services after they leave home?” the question would be, “What do you think parents can do to influence their children’s religious attendance after they leave home?” Smith wanted to know what kind of model parents follow for transmitting their religion. And “religion” isn’t a dirty word for Smith—it’s cultural practices that put people in touch with the supernatural.

What did Smith and Adamczyk find? Lots! The few (seven) but lengthy chapters (30-40+ pages per chapter) include elements parents use to map out their religious parenting, analysis of parent-child effects from the NSYR, the centrality of parenting for transmitting religion, comparisons with other parenting surveys, immigrant parents and the challenges that come with it, the impact of one’s own parents in shaping the way parents choose to practice this role today, and what parents expect and want from congregations. If you have an interest in any one of these topics, you will have plenty of fodder from just that chapter. Here’s just one example.

Many people bemoan that so many young people leave the church. Millennials, and now Gen Zers, certainly exemplify this. But rather than “everyone’s leaving the church,” Smith and Adamczyk found six different trajectories from mid-adolescent to emerging adulthood, roughly ages 15-25. The “Steep Decline” (big drop) group accounted for only 13%. The “Shallow Decline” (go down just a little) registered about twice as much at 25%. Same with the “Low Decline” (started low and went a little lower) at 25%. But the largest group turned out to be “Stable High” (high and they stay high) at 29%. Why doesn’t anyone notice or talk about that group? The other two groups, while small in size, actually show an increase in religion during this phase of life. The “Moderate Shallow Incline” (average, but going up gradually) at 6% and the “Steep Incline” (big rise) at 2%—think of a radical conversion. This provides much more texture than, “The youth are leaving the church!” Of course, statistical reporting usually reveals something different than vocal reporting that often is only anecdotal.

Most people won’t read a book like this, but those who do will find themselves equipped to lead with a more nuanced and informed perspective for something as important as passing on one’s faith/religion. And most people in our sphere of influence have a vested interest to do so.