Book Review: God and the Pandemic: A Christian Reflection on the Coronavirus and Its Aftermath 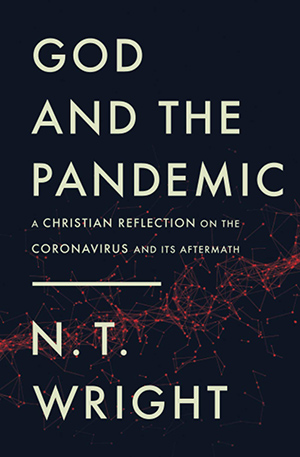 God and the Pandemic: A Christian Reflection on the Coronavirus and Its Aftermath by N. T. Wright. Zondervan. Grand Rapids, MI. 2020. Total pages: 76.

Shortly after the onset of the coronavirus pandemic, New Testament scholar, N. T. Wright put together this timely Christian response. He dated the preface April, 2020. One wonders what he might write differently after nearly a year of the pandemic, and its worsening impact as the northern hemisphere “winter flu season” compounds this.

Wright began his observations by comparing the ancient and primitive response to supernatural phenomena to the forces of nature, as in “The gods must be angry.” He then identified three philosophical responses Greek intellectuals offered: 1) Stoics—everything is programmed and you can’t change it, so just deal with it. 2) Epicureans—everything is random and out of your control, so just make yourself as comfortable as possible. 3) Platonists—our current life is only a shadow of true reality, so minimize the bad in your life by replacing it with the good beyond this world.

It doesn’t take much to see those same three types of Western responses to the coronavirus in our “sophisticated” world today. Which one do you lean toward? It is what it is? Hunker down and watch Netflix? This world is not my home anyway, so just let me go worship at church!

While some continue to ask, “Why?” the marginalized continue to suffer the most, and a better Christian response might be “What?” as in, “What will Christians do during this pandemic?” We had a practice run at this when Hurricane Katrina left the marginalized to suffer while the privileged were able to leave for safer places. Instead of asking why Hurricane Katrina happened, and instead of taking care of one’s self, the Christian response then was to go toward those in need and to serve them. Such actions reflect what Christians through the centuries have done—healing the sick and providing comfort and help to those in need. What about one’s own safety? Without being reckless, they simply put following Christ as a higher priority than their own safety. Isn’t that what Jesus did? Isn’t that what his followers would do?

As a New Testament scholar, Wright acknowledged the Old Testament call to lament tragedy, to name it, and to leave the results in the hands of God. His New Testament contribution comes in the centrality of Jesus and the orientation to look forward rather than only to lament the past. The resurrection of Lazarus illustrates this. “Jesus, if only you had been here, my brother would not have died.” The hope is not merely in a distant resurrection, but in a resurrection that will happen as the next part of the current story. Christ’s own death and resurrection illustrate it with the punctuation that the grave clothes no longer need to be untied, like Lazarus needed, because Christ left them folded inside the grave he left.

The kingdom of God, which Christ announced at the start of his ministry, gives us purpose and direction in times like a pandemic. Instead of asking “Why?” the kingdom orientation moving forward is “What?” and “Who?” What needs to be done? And Who needs help to restore the kingdom God intended at creation, which his people join him in re-creating now? To quote Jesus, “As the Father has sent me, so send I you” (John 20:21).

The Pauline passage in Romans 8 includes God’s creation groaning. The pandemic spurs such responses. Like Christ, we groan/weep with the creation that suffers, and we are right in the middle of it with the rest of creation. At the same time, God is active with the Holy Spirit in such times, working synergistically (ergazomai from the verb synergeo = work together) with his people who are present in the pain. And that is why “all things work together for the good to them who love God, to them who are called according to his purpose” (vs 28). God’s purpose is for his people to help save the suffering world—a continuation of what Jesus did because the ministry of Jesus continues through his Holy Spirit-filled people.

Lest you think this is just about putting on a happy face, Wright acknowledged that the disciples hid behind locked doors because of their fears and doubts even after Christ has been resurrected. But when the Holy Spirit filled them, that changed. It didn’t mean there were no more tears; there were. But those tears and pain were now experienced as fellowship in Christ’s suffering rather than their own ego-centric concerns.

And finally, for those who focus on returning to a building called “the church,” remember that the curtain has been torn, revealing that the Most Holy Place is empty. No longer is God contained inside walls. He’s loose and is on the move. So you can expect to find him everywhere. Perhaps the pandemic has released the acknowledgment that God’s presence isn’t tied to church buildings. Why lament that so few attend your church when God keeps appearing all over the place, more powerful and more pervasive than the pandemic?