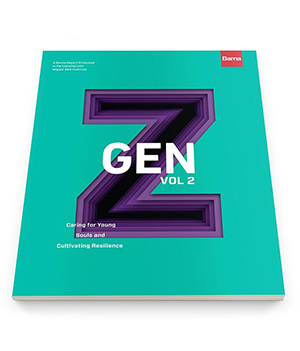 Barna, in conjunction with Impact 360 Institute, published Gen Z in 2018. As a sequel, Gen Z Vol 2, serves as a follow-up due to on-going research. It’s also wise to update a generational overview as the generation continues to come of age. And a lot of changes occur as this cohort moves through its teen years. For some of the reporting, Barna divided the group into teens (ages 13-17) and young adults (ages 18-21). If you’re a bit older than that, you are either on the cusp or hanging onto the coattails of the Millennials.

While statistics can bore people quickly, Barna presented it in bite-size pieces with great variety in colorful graphs. They also included anecdotes and short testimonies from experts in the field who addressed key points in their reporting. What were some of the key points?

Surprise! Young people experience a lot of emotions, and therefore need support people and systems. That sounds so predictable and general, like a horoscope. Couldn’t the same thing be said of all ages in the lifespan? Take a guess at which of the following four groups have the highest level of negative emotions: 1) Teen Boys; 2) Teen Girls; 3) Young Adult Men; and 4) Young Adult Women. The answer: Females report more negative emotions, and young adults more so than teens. You may know individuals that differ from this, but with statistical reporting, you get an overview (of 1,503 US young people ages 13-21).

Statistics can provide a helpful overview and indicate trends and shifts. But they can also mislead either intentionally or unintentionally. The numbers get interpreted. That’s more of an art than a science. For example, young people feel pressure, both internally and externally to be successful or even to be perfect. It’s not likely that people reading this book review are Gen Z young people, but more likely those who minister to today’s young people. Think back to your teens years and the start of young adulthood. Did you experience any pressure, from yourself or from others, to succeed? What percentage of Gen Z feels that kind of pressure?

After working with young people for several decades, I would have guessed the numbers would be higher. I wouldn’t report this as the first theme of Gen Z—pressured young people. If anything, I’d wonder why others don’t at least match the internal drive that only one-third of young people have. I might give ‘em a kick in the seat of the pants, or “encourage” them to get creative during this pandemic and the opportunities that are likely to explode coming gradually out of it.

On a different topic, 82% of the young people reported experiencing trauma (leaving one with a sense of helplessness, terror, or distress lasting more than a few weeks). And there are ethnic disparities on the amount and frequency of such experiences. Hispanics are more than twice as likely as Whites and Blacks to be very high on the trauma meter—the cumulative effect of highly traumatic experiences. When it comes to frequency of traumatic experiences, Blacks report significantly more such events than Whites, Hispanics, or Asians. Does that shock you? Should it? Will it provoke you to action?

Adults frequently have concern about the amount of screen time today’s teens spend on their devices. Drawing on pre-COVID 2019 data from Common Sense Media, screen time for teens ages 13-18 averaged 7.22 hours per day. Barna asked if this generation thinks they spend too much, too little, or just the right about of time on their devices daily. Well over half (60%) said they and their generation spend too much time on their devices. But they continue their practice, native to them from birth. They want to be connected and informed, and they think their devices are the way to achieve both. Yet the more time they spend online, the less connected they feel. And they seem oblivious to the fact the media feeds they receive to “keep them informed” are based on manipulative algorithms. No wonder they deeply believe what they continue to be fed and deny other realities. (Note: This isn’t just a Gen Z problem!) Barna, which was influential in Amy Crouch’s co-authoring of My Tech-Wise Life (reviewed previously), drew on her for a few pages on how to relate to social media for Gen Z. Next came sections for parental ideas, ministry leader ideas, and ideas for both groups to work together for Gen Z’s benefit when it comes to social media.

What about deciding between right and wrong? The majority in Gen Z believe that’s a moving target defined by each person. While they support openness to different perspectives, they are not open to confronting or challenging a person’s perspective. Only in “safe spaces” can such dialogue take place—meaning you can expect an exchange of ideas, but no attacks or dominating allowed. Trust in institutions remains low, and went even lower in light of the police and BLM confrontations; ditto with how the US has done in handling the coronavirus pandemic. Gen Z meets regularly with older mentors (44%) and they also mentor those younger than themselves (35%). But their bottom-line trust is with peers—which encourages some adults and terrifies others.

What about church attendance? Yes, Gen Z continues the growth of the “Nones” (no religious preference/interest), but actual attendance by Gen Z at church each week is the same as for adults (22%). And we thought teens were the problem! Note these next two comparisons. Monthly church attendance for Gen Z is 18% compared to just 10% of adults. Who has the problem here?! And those who haven’t set foot in a church in the past year come in at 28% for Gen Z, but 53% for adults. It sounds like Gen Z is going to need to find a way to bring (adult) church dropouts back to involvement in the church! Try out those stats the next time you hear someone complain, “The youth are leaving the church.” Yes, they are; but not as badly or as many as the adults!

Additional affirmation for Gen Z came from statistics in Kinnaman and Matlock’s Faith for Exiles (previously reviewed), another Barna product published with Baker Books. They provided four helpful categories to classify church involvement by young people: Prodigals (ex-Christians; 22%), Nomads (unchurched; 30%), Habituals (attend out of habit, not heart; 38%), and Resilient (disciples; 10%). The affirmation comes from cherry-picking primarily from the Resilient. But that’s only 10% of the group studied, and it’s the most committed tenth at that. Of course those numbers are going to look strong.

While only 79 pages in length (the first volume is 117 pages), it cost $39. Statistics are expensive, and Barna presents them well. I recommend this as a “must have” resource for those who work with young people, especially if you have a book budget. Whether you read these few pages or not, just saying that you have this resource and that you’ve looked at it will make you seem current.