Book Review: Back-Pocket God: Religion and Spirituality in the Lives of Emerging Adults 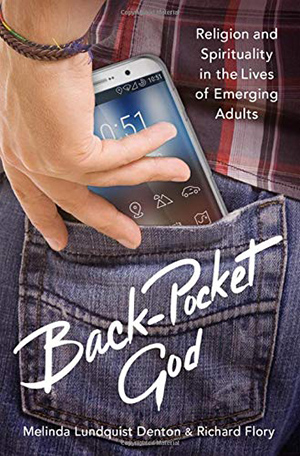 Back-Pocket God presents the results and analysis for the last year of the The National Study of Youth and Religion (NSYR), a 10-year longitudinal research project of youth in the Unites States. Originally this study engaged 3,370 representative 13-17 year-olds and their parents in 2002-2003. In addition, researchers personally interviewed 267 of the teens to add more texture to their findings. You may have read about this in the 2005 publication Soul Searching by Christian Smith and Melinda Lundquist Denton (Smith’s doctoral student at that time at the University of North Carolina at Chapel Hill). In the first publication Smith created the term “moralistic therapeutic deism” to describe the generic religion of most American teens. This included a belief in some type of deity not too involved in one’s life except when you needed it to make sure you are happy, having an internal sense of right and wrong without being able to articulate it, and an expectation that good people go to heaven when they die. A second wave of research in 2005 yielded Souls in Transition, and then the third wave in 2008 reported its findings in A Faith of Their Own. Following these same teens (and some now in their 20s), Smith and his team surveyed thousands and personally interviewed hundreds of these young people.

The final report in this series, Back-Pocket God, bases its results on surveys from 2,144 of the original teens (65 percent retention). These participants ranged in age from 23-28 when they took the survey in 2013—eight years ago. This means they are 31-36 years of age now. In American demographics, these would be a portion of the Millennial cohort, but not representative of Gen Z—today’s young people.

The book title nicely captures the overall attitude of this group regarding how they relate to religion. Think of your phone and the many apps you have. Religion is just one of those apps. Tap on it when you happen to need it, if you ever do. It should be available to you 24/7 but only when you choose it. Seriously, it’s just one of your many options.

To give a general overview of how these respondents relate to life, many are still moving toward self-sufficiency—hence the term “emerging adults” rather than adults. Family and friends continue to rate as the highest values, with marriage and parenthood largely put off until later in their lives. Rather than seeking emancipation or a separate identity from their parents, they maintain generally positive relations with parents, many still living with their parents despite being in their mid or even late 20s. Friendship, the highest value, finds its cause in shared interests and activities, sometimes going back to high school days. In terms or work, career, and finances, most are working, but it’s certainly not their dream job, nor does it provide much income. But the expectation remains that will come in due time, even though most don’t have much of a plan or pathway identified for that to occur. Like so many Americans, this cohort also verbalizes care and compassion for those in need, but few actually spend time or money for such causes or people. When it comes to politics, most aren’t interested and consider politicians to be untrustworthy and selfish. Morality seems clear-cut based on one’s gut intuition rather than articulating anything of substance. It should be private and individual, with little or no outside influences. About half in this group don’t think there are any universal truths. And this groups remains buoyantly optimistic about their future, not regretting anything from their past, for that is what made them the person they are. What’s most important to them? About 90 percent say family and friends, while less than 50% say having a personal relationship with God is important or very important to them.

When it comes to religious involvement, two trends emerge over the 10-year longitudinal study—one expected and the other somewhat surprising. The expected trend shows as a decline in participation and beliefs from the teens to the 20s, with the corresponding rise in non-affiliation (termed “Nones” by Pew Research). The somewhat surprising trend is an increase in commitment for those who do stay involved, even among those who switch from one religious group to another (about 25% of those committed switched). And while the decrease in church attendance shocks and saddens others in church, note that the majority of emerging adults in this final study, 62%, continue to describe themselves as religious and have positive views of religion, and yet more than half of all respondents indicated they don’t attend church on a weekly basis. Another standout is that Black Protestants are the group with the highest and most stable religious engagement throughout this study.

In terms of commitment and identity, specific denominations don’t seem to matter at all for these emerging adults. Better descriptors would be levels of commitment to any religion. The researchers labeled four descriptive categories: 1) Not religious (35%); 2) Disaffiliated (16%); 3) Marginal (23%); and 4) Committed (27%). No group forms a majority. The trend tends to be toward less engagement in religion, but that doesn’t mean a lack of openness toward God. They simply don’t care. Instead of a social or familial expectation to be involved at church, those who do engage in church have made a purposeful intention to do so, hence the term “Committed.”

While the overall religious involvement for emerging adults continues to be downward, the movement is gradual for many. Parsing the respondents statistically, six groups clump together, with the three largest groups dropping in terms of religious involvement and interest, and the three smaller groups rising over their adolescent years. The most stable group is those who started high religiously and remained high. While this group as a whole unmistakably trends downward, don’t pigeonhole all of them since about three in ten actually become more religious during this time.

While the median age for marriage has extended over the past six decades (29 years of age for males and 27 for females), those engaged with religion tend to marry sooner. Those not engaged are more likely to cohabit first but still plan to marry one day—later. The later they wait, the longer they have disengaged from previous religious involvement, and the less likely, it seems, they will re-engage. Those who expect emerging adults who left the church will come back when they marry and have children seem to be delaying a likely disappointment. Congregations that emphasize family and assist with marriage and child-rearing will likely reap benefits.

The authors write well and mix stories from their interviews with large-group statistics and analysis. They also repeatedly suggest trends and responses those from a church orientation might take with these emerging adults. Although it’s not a “light” read, it isn’t necessarily “heavy” either, especially for those who minister “with” and “to” emerging adults. But remember that the group in this study from 2013 is now in their 30s, not their 20s.