Book Review: As Jesus Did... A Unique Look at Small Group Dynamics in Jesus’ Group 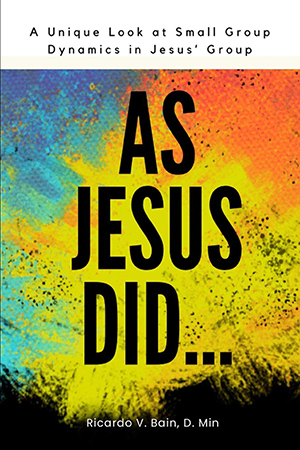 As Jesus Did... A Unique Look at Small Group Dynamics in Jesus’ Group by Ricardo Bain. Self-published and available at Amazon. 2020. Total pages: 203.

This particular publication combined several threads simultaneously. In addition to small group dynamics, Bain used the example of Christ’s group of 12 disciples as a small group. He searched for hints to indicate characteristics of individuals, and how these contributed to the interchanges and interactions of these “called” misfits who became the ones through whom God planted the Christian Church that continues today.

You may have preached a sermon of drawn on illustrations from outspoken Peter, or John—the one whom Jesus loved. The few times Andrew gets mentioned in the Gospels he is always taking someone to Jesus. But do these few examples adequately personify the complete person? Are these telegraphing the way they behaved within a small group? And what about Judas (Iscariot)? Was he really the devil right from the start, just waiting to turn traitor on Christ? If so, how was he able to “heal the sick, raise the dead, cleanse the lepers, and cast out demons” (Matt 10:8) when Christ sent his disciples two-by-two with miracle powers announcing his kingdom?

What about lesser known disciples? What comes to mind when you hear of “Simon the Zealot” besides Zealots? Why did he cease being a Zealot, or did he? When we hear “Simon” we think of Peter rather than the other Simon. How much do we really know about this (former) Zealot?

What about Nathanael, or was his name Bartholomew, or was it Bartholomew Nathanael? John 1 records Nathanael’s initial turnabout from “Can anything good come out of Nazareth” (vs. 46) to “Rabbi, you are the Son of God; you are the king of Israel (vs. 49).” Is that enough to pigeon-hole him for Christ’s entire ministry, especially when Christ transformed his disciples in so many ways?

Will Thomas forever be associated with a lack of belief because of his one post-resurrection statement? Although he proclaimed he wouldn’t believe until he had seen the nail marks in Christ’s hands and put his hand into Christ’s side (John 20:25), He confessed Christ as Savior and lord when he did see him (without having to touch him). In the country of India, Thomas the disciple continues to be considered a saint because he took the Gospel to that country. But Westerners still associate him only with doubt. What do we really know about Thomas?

Bain seems to draw primarily on secondary sources, such as websites that report ages of the disciples, how and when they died, and what they did outside apart from the revelation of Scripture. These may or may not be true. They are extra-biblical sources and often draw on tradition. You might consider the author to be bold or overstepping his bounds by citing these as indicators of the relatively little-known disciples.

Pastor Bain challenges the reader to consider how Jesus worked with each discipling, considering their unique characteristics and how he mercifully shaped them into his own small group. The author then invites us to follow similar practices in relating to individuals in the small groups we lead.

Don’t let the page count of 203 pages keep you from diving into this resource. The font is large and the line spacing generous. With multiple, lengthy quotations from familiar Scripture passages in the Gospels, it’s a quick-read. Bain wrote in an easily understood manner and with a gentle flow to his well-organized presentation.

Dr. Bain deserves commendation for drawing on his various sources to flesh out a broader picture of the disciples than most people have. But his purpose seems to be an invitation to consider group dynamics and the people with their various personalities, quirks, and tendencies. As followers of Christ, and empowered by the Holy Spirit, we are called to lead small groups “as Jesus did.”